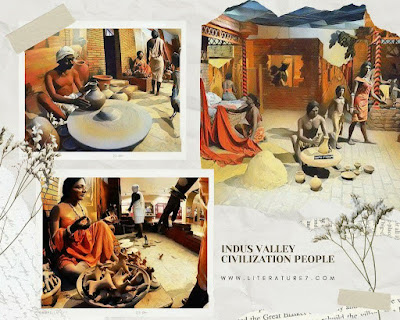 While no temples or shrines have been uncovered at the sites, many statues and terra cotta figurines indicate that the Indus Valley people were idol worshippers.

Again, the Harappa seal depicts a three-faced deity seated on a throne with crossed legs and wearing a horned dress, surrounded by many animals such as elephants, tigers, and buffalo, symbolizing the idea of Lord Shiva. He was common among the Indus Valley people’s male gods and was worshipped by all.

The Indus people also practiced animal worship. Among the most revered species were the rhinoceros, tiger, lion, buffalo, humped bull, and zebra. The bull was known as Lord Shiva’s vehicle.

The discovery of the Great Bath at Mohenjo-Daro suggests that water played a significant role in the Indus Valley people’s religious rituals. The Great Bath resembled a temple dedicated to the River God.

The Indus Valley people seem to have worshipped the Peepal and Neem trees. Additionally, Duck was known as a holy creature.

Certain seals depict Swastika and the Wheel, indicating that the Indus Valley people also worshipped the Sun God. Additionally, evidence exists that they worshipped the God of Fire.

Thus, it is clear that modern Hinduism owes a great deal to Indus Valley culture and religion. Lord Shiva was as famous as he is today among the Indus Valley people. The peepal and tulsi trees are also revered in Hinduism.