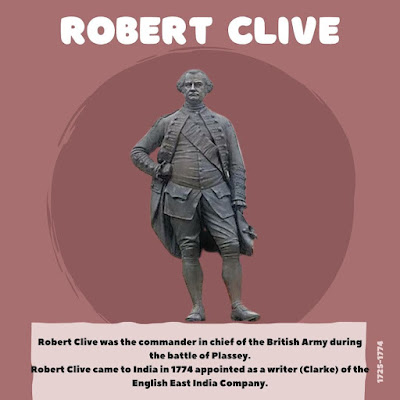 There is no doubt about it that Lord Clive was the founder of the British empire in India. Many British officials came before & after him, but no one exhibited such excellence as Clive had. Before that, the British rule had not been established in India, and whatever happened after that was merely the expansion of the rule founded by Clive.

Robert Clive was a young teenager of just 18 when the East India Company initially recruited him as a clerk, then transferred to India. In the following years, he advanced quickly and was promoted to the position of Governor due to his effectiveness and capabilities. Clive’s fame grew to its peak at the time of the year 1750 A.D. when he attained an important victory in Arcot and further boosted the prestige and power that was the English. Since that time, Clive was able to be included as one of the greatest commanders.

Clive came back to India around the year 1756 A.D. After attaining victory at the Battle of Plassey, Clive appointed Mir Jafar as the Nawab of Bengal and increased the assets that were available to the Company. Then, he travelled back to England. His opponents moved against him, accusing him of forming. Conspiracy and intrigues in India; however, the Parliament cleared him of all the accusations. However, he was in such a state of discontent with false accusations that he took his own life at the age of 1774 A.D. Historiographers have applauded him for his contributions to his fellow British nation. Macaulay wrote, “Our island has never produced a man who was more outstanding in army or in the council.”

This victory was useful on two counts

This victory was useful on two counts:

ii) Due to the wealth of Bengal, the English were able to destroy the power of the French in toto.

The increase of influence in Deccan & Bengal was not enough to establish the British empire in India. The collection of revenue is considered an important part of the administration. “Administration is that which collects revenue.” Clive also did this important activity for the British. In 1765 he concluded the treaty of Allahabad with the Mughal emperor, according to which the English got the Diwan of Bengal, Bihar & Orissa. The adjective of Diwani was that the British got the right to collect land revenue from these provinces.

Lord Clive completely brought Shah Alom, the Mugal emperor, under British power. He got concessions for the English Company according to his own will. This had a great impact on many Indian powers.

Robert Clive forbade the company official to accept presents. He put restrictions on individual trade & stopped their double allowance. As soon the company emerged as an administrator, Clive gave new lit up to its face.

Despite all human faults, there is no doubt that Clive offered signals for his British empire. He shrewdly blocked the way of Dupleix and boosted the influence on the English in both politics and trade. He utilized both legal and illegal methods to ensure the growth and progress of the Company and eventually was able to establish British control over India. Through the Treaty of Allahabad, he granted the legal rights to British English to the revenues from Bihar, Bengal and Orissa. Lord Burke has praised him as follows, “He settled great. foundations. Lord Clive traversed a deep river with a bottom that was not known, leaving the foundations of a bridge to his successors, over which the blind could stumble and blind people could stumble towards.”

It was the truth that Clive was an intelligent man and had accumulated a great deal of wealth by using immoral methods; however, whatever the actions he took was done in the national interest. The flaws he had were not significant from an English perspective. Still, there was no way that an Indian would ever be thankful to Clive for his work as he opposed the interests of the Indians and kept his interests and those for the British Government at the top of his list.