Mohenjo-Daro and Harappa were the Indus Valley Civilization’s two most important sites. In 1922, R. D. Banerjee conducted an excavation at Mohenjo-Daro in Sindh’s Larkana district. Dr. R. B. Dayaram Sahni unearthed Harappa in Punjab’s Montgomery district year (now both sites are in Pakistan).

The two most significant sites developed near the Indus River, and thus the newly discovered civilization became known as the Indus Valley Civilization. With the archaeological discoveries at Harappa and Mohenjo-Daro, India joined Mesopotamia, Egypt, and China in claiming membership in this community of the world’s oldest recognized civilizations. 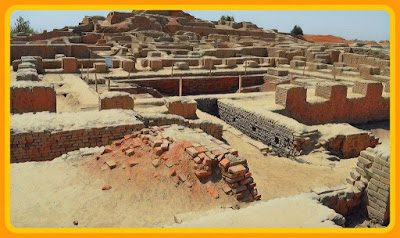 The Indus Valley People’s Social Life: We may piece together the social life of the Indus Valley people from various artifacts discovered in the ruins of Mohenjo-Daro and Harappa. They were classified into four groups: learned individuals, warriors, merchants, and the working class or laborers.

The population included vegetarians and nonvegetarians. Vegetarians historically consumed wheat, barley, rice, milk, and milk products. People who were not vegetarians favored fish, beef, mutton, and tortoise. Dates were a favorite fruit of theirs.

The Indus Valley people wore both cotton and woolen garments. Clothes were also sewn, as shown by the discovery of needles and threads. Both men and women wore their hair long. Their passion for beauty is confirmed by discovering ivory combs, bronze mirrors, razors, powders, and lipsticks.

The Indus Valley people had a strong affinity for ornaments. Both men and women often wore ornaments. Ornaments were crafted from various metals, including gold, silver, copper, bronze, and ivory. Bangles, necklaces, armlets, finger rings, earrings, and bracelets were all extremely common during this time period.

The Indus Valley people cremated and buried their dead. Women held a very respectable place in society. The primary forms of entertainment were gambling, fishing, bullfighting, dancing, and singing. The majority of the entertainment took place indoors.

Economic Life in the Indus Valley: The large and planned cities of Harappa and Mohenjo-Daro attest to the people’s prosperity. They were mostly agrarian. Wheat, barley, corn, cotton, and vegetables were their primary agricultural products.

The people of the Indus Valley worked in a variety of occupations. They were skilled in the spinning and weaving of cotton and woolen garments. The pottery industry was the most prevalent. Their use of gold, silver, bronze, tin, and copper suggests that the Indus Valley people enjoyed a prosperous economic situation.