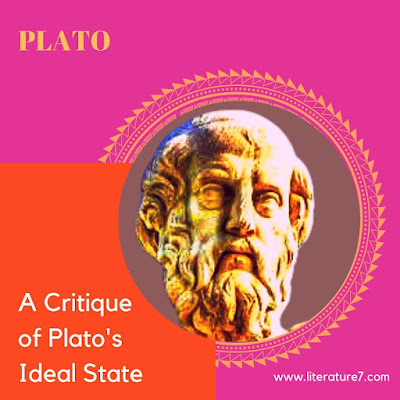 Critics have pointed out certain shortcomings in Plato’s theory of Ideal State. Plato draws an analogy between the individual and the state, but it is confusing. The Ideal State is absolute and totalitarian. The scheme of communism is impracticable. Plato’s advocacy of communism of family on eugenic ground is ridiculous, absurd and fantastic. Plato, in his Ideal State, fails to denounce the evil institution of slavery. He ignores the producing class, which is the majority. He provides no system of education for this class.

Plato’s system of communism violates human nature. His conception of justice leading to functional specialisation condemns an individual to a particular duty throughout the life.

In Plato’s Ideal State, individuals are no better than robots performing particular tasks only as machines. Plato’s philosopher-kings may have wisdom but they are likely to abuse their power. He assigns monopoly of power to the philosopher-kings, but he fails to take note of the disastrous consequences of such monopoly of power. Censorship of art and literature, suggested by Plato, is also illiberal. R.H.S. Crossman, therefore, says, “Plato’s ideas are the most savage attack upon liberal ideas which history can show.” Sir Karl Popper accuses Plato as an enemy of the open society for his advocacy of censorship of art and literature, rule of philosopher-king and class rule.

Despite all criticism, we cannot deny the significance of Plato’s Ideal State. Certain features of the Ideal State, such as, functional specialisation, division of labour, compulsory education, equality of men and women and emancipation of women have exercised profound influence on future thought and practice. In Plato’s favour, it may be said that for a thousand years Europe was ruled by an order of guardians considerably like which was visioned by him. During the middle ages it was customary to classify the population of Christendom into ‘laboratores’ (workers), ‘belatores’ (soldiers) and ‘Oratores (clergy). The last group, though small in number, ruled with almost unlimited authority over the population. Like Plato’s guardians, the clergy were elevated to authority not by popular vote but through their demonstrated ability in studies and administration. The Ideal State, thus, may be a utopia but it is not a chimera, totally divorced from reality.

The goal of the Republic is a just man and by that process a just city. Plato firmly believed that a just and virtuous man is possible but he had misgivings about the Ideal State- “in heaven… perhaps, is laid up for the man who wants to see and found an ideal city…. For him, it did not matter when the Ideal City existed or would exist, but he could think of no other state except Ideal. As Will Durant observed that “Plato died a sad man, knowing fully well the impossibility, though desirability, of the Ideal State that he sketched so artistically and meticulously.” The Ideal of human perfection and the possibility of attaining it is the vision and aim of Plato in his The Republic.