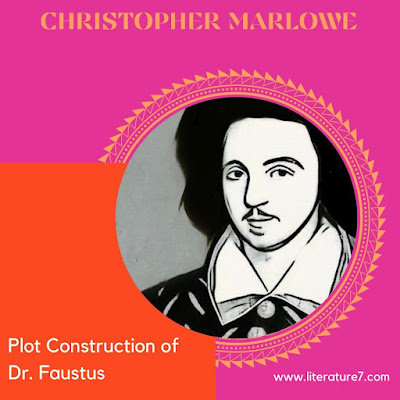 The true sin of Faustus is not the desire for strength and worldly pleasures; it is, first and foremost, the pursuit of human rather than divine wisdom, and with it, the cult of black magic and forbidden knowledge. Marlowe makes dramatic use of the Protestant belief that such acts are simply damnable. The Moralities’ Good and Evil Angels become projections of the warring elements in Faustus’s soul.

The play begins with the arrival of the Chorus, who talks of Dr. Faustus’s birth. Faustus was born in Germany of peasant stock. He then travelled to Wartenberg, where he was soon bestowed with the title of doctor. Following this, a brief account of Faustus’ tragic life is given, detailing how he became drawn to necromancy and thus brought about his own demise.

In the first scene of Act I, we find Faustus soliloquizing. He is contemplating the idea of abandoning his physician’s profession in favor of necromancy. He prefers the “magician’s metaphysics” to physics; he fantasizes about a world of benefit and delight, of strength, honor, and omnipotence, and eventually concludes that he must be a magician. With this objective in mind, he summons the assistance of his magician associates, Valdes and Cornelius. They tempt Faustus by telling him that magic will carry spirits of every aspect to his feet, and they will be at his disposal at all times. Faustus becomes more enthused. At his plea, his friends plan to teach him the fundamentals of necromancy. After mastering the craft, Faustus is able to summon Mephistopheles, who implores him to abandon his “frivolous demands, which strike fear into his fainting soul.” On the other hand, Faustus wishes to remain steadfast in his pursuit; he also expresses a desire to sell his soul to Lucifer in return for a twenty-four-year life of voluptuousness.

Act II has Faustus debating whether to return to God or continue his sorcery. This internal dispute is exemplified by the debate between the Good and Evil Angels. Faustus quickly summons Mephistopheles, and Faustus agrees to sacrifice his soul. He stabs himself in the arm to ink the bond, guaranteeing the sale of his soul. The following are the rights. To begin, Faustus may be a physical manifestation of a spirit. Second, Mephistopheles will serve him and will be subject to his commands. Thirdly, Mephistopheles will assist him and get him everything he wishes. Fourthly, he shall remain invisible inside his chamber or home. Finally, he shall manifest himself to Faustus at all times, in whatever form or shape he pleases.

However, Faustus cannot be content with this. The dispute in his mind continues; he considers renunciating magic and repenting at one point. Marlowe reintroduces the Good Angel and the Evil Angel to symbolize Faustus’s mental inconsistencies. Faustus cries out for Christ in a fit of weakness. Lucifer, Beelzebub, and Mephistopheles all join simultaneously. They are offended by Faustus’s use of the name of Christ and wish for him to think exclusively of Lucifer. Faustus, terrified, swears not to do so. Lucifer then demonstrates one of his pastimes to him. He manifests his supernatural abilities, the Seven Deadly Sins, in their normal forms. Before Faustus, Pride, Covetousness, Wrath, Envy, Gluttony, Sloth, and Lechery enter one by one.

The third Act brings us to Rome, where Faustus plays practical jokes on the great men of the day, the Pope and Cardinal, and uses his magic on poor wretches. However, unable to do much with his magical abilities and despair at the thought of hell, Faustus is about to commit suicide at the prompting of Mephistopheles when an elderly man appears and convinces him to pray for God’s mercy. This is revealed in Act five. Mephistopheles appears and threatens to rip him apart for violating his contract, prompting him to sign another with Lucifer. Faustus then approaches Helen of Troy about being his paramour. On the night of his 24-year lease on life’s expiration, he awaits the hour of midnight with growing fear and despair. As midnight approaches, the demons catch him and drag him to hell, shrieking.

This is the context in which Marlowe’s Doctor Faustus is set. However, Marlowe’s play has flaws in its structure. The most serious flaws are those found in Marlowe’s other works. He also loses sight of the tragedy’s minor characters. His Faustus is an island unto himself. We have the impression that Faustus possesses no moral authority to oppose. He is an outcast in a world populated by Lilliputians. The other characters are entirely unnecessary: his Wagner does not exist independently. When we read the play, we frequently have the impression that omitting all minor characters would have added nothing to the drama. Additionally, Marlowe’s Doctor Faustus is written in a solemn tone. Each of his plays is pitched on a single tone, that of youthful zeal and tragic passion. His clowning scenes (if they are from his pen) read as if the actors were free to fill in as they pleased. Along with this lack of humor in Doctor Faustus, another aspect worth noting is the play’s near-complete lack of female characters. Helen is a figment of her imagination. The other lone female character is the Duchess of Vanholt, to whom Faustus magically delivers a bowl of ripe grapes. However, Doctor Faustus is a poor drama; it is essentially a series of disparate scenes that are loosely connected. These flaws demonstrate Marlowe’s art’s constrained boundaries.

Marlowe’s flaws in the construction of his tragedy also demonstrate how superior Shakespeare’s approach was to his; Marlowe’s verse is strangely monotonous in comparison to Shakespeare’s. In Marlowe’s dramatic verse, we find an accumulation of self-contained verses, all of which follow the same rhythmical pattern. On the other hand, Shakespeare’s verse-melody is constantly varied. He was capable of doing it better than Marlowe. The latter’s verse style is much less adaptable than even Shakespeare’s early verse style. Marlowe’s diction is so singular and remarkable, sustained by the Renaissance men’s soaring intellectual ambition. He is Shakespeare’s inferior as he descends to the common earth.