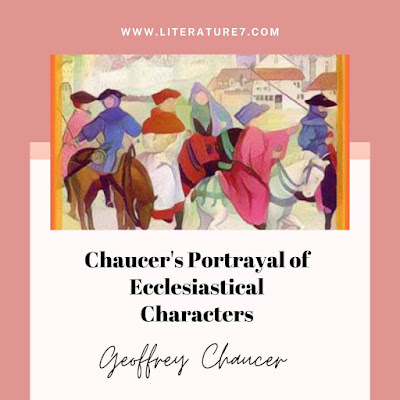 The ecclesiastical classes are represented by the Monk, the Prioress, the Pardoner, the Summoner and the Parson. The hypocrisy of the 14th-century religious order had an impact on the poet’s mind. Chaucer suppresses these emotions, refuses to frown or rage. The village Parson, the Summoner, the Monk, the Prioress, and the Pardoner are chosen to present the condition of religious order vividly. Except for the Parson, every member of the order has abandoned the high standard of piety and renunciation. They grow hypocritical and mean.

The ‘hunting monk’ is a modernist. He believes that the teachings of St. Maure and St. Benedict are outdated. He doesn’t believe in the rule that ordains the Monk to stay within his Cloister and not to indulge in hunting. He did not care at all for the text, which preached that the hunters were not pious persons. He should not spend his time in the Cloister, or bother his mind with reading, as St. Augustine urged. Hunting was his passion. He wore a finely trimmed garment lined with fur, and an ornamental gold pin fastened his hood.

He was a fat lord with sparkling eyes, his shoes were made of leather, and his horse was in excellent condition. Indeed, he was a fair prelate, for he wasn’t pale like a ghost.

The Prioress is kind, gentle, tender-hearted, but full of affection in her manners. Her smile is simple and charming. She can sing her service divine in a nasal tone. She is cautious with table manners, and she is also very sentimental.

She was known as Madam Eglantine, had her greatest Oath was by St. Loy. She sang God’s prayer with a charming, nasal tone. She spoke French in the style of the school of Stratfordatte-Bowe, as she was unfamiliar with the French of Paris. She was very well versed in table manners, and she ate carefully, and not a drop fell on her breast. She wiped her upper lips so clean so that no trace of grease could be seen around her cup; indeed, she took pains to imitate a country kind of grace.

As far as her sentimental nature, she was so charitable that she would weep if she saw even a mouse caught in a trap. She loved her little dogs, and she wept bitterly when any of them died. Or someone hit one of them with a stick. She wore an elegant cloak, with a coral trinket under her arm. A set of brooches of shining gold were hung on her neck. Her companions included a nun and three priests.

The village parson is an exception in this picture gallery. He was a good man of religion, and he was rich in both religious thought and hard work. He enjoyed teaching his parishioners. He was a good human being, hardworking, and patient during his misfortunes. He would help his poor parishioners with his Church income, and he would also visit the area of his Parish. His parishioners were so inspired by his example, he was always the first to do and the second to teach. In this, he followed the Bible’s teachings and added that if gold rusts, what will then iron do. In other words, if a priest goes corrupt, it is usual for a layman to become so.

Therefore, instead of running to London or to St. Paul’s, he stayed at his Parish and cared about the welfare of his people. He was an inspiration to his people. However, if any person was obstinate, no matter whether he was high or low in status, he would rebuke him sharply for the time being.

Summoner had a fiery red face, covered with red pimples. He was hot and wanton like a sparrow. His appearance scared children. The Summoner is worse than the Pardoner. He claims that a man’s soul can be found in his purse, for It is in his purse that the Summoner is punished. The Summoner thrives on the misfortunes of others. His disease could not be treated with any medication or ointment. He enjoyed garlic, onions, and also leeks with strong red wine.

He would shout like a mad man when he was drunk and could also speak a few words of Latin. He would lend his mistress to his friend for 12 months in exchange for a quart of wine. He believed that anyone could be guilty of any crime if they had enough money. He had the young people diocese in his hands by mere threat in his own way. He knew their secrets and wishes, and he acted as their advisor.

The Pardoner represents that cynical group of exploiters who have doubtful qualifications and who speculate and live on popular superstition. He is a liar and will do anything for his petty gain.

The Pardoner came singing, ‘Come hither (here), love to me!‘. He had His peculiar manners, which he believed to be contemporary. His shoulders were covered in hair that lay thinly, strip by strip. He rode dishevelled, bare-headed with eyes staring like a hare. He had a full wallet filled with pardons that he had bought straight from Rome. He pretended to be carrying many holy relics in his bag, and by exhibiting these, he earned more money per day than a parson would in two months. Thus, with feigned flattery and jokes, he made people his dupes. He could read passages and tell stories, and he was able to sing an offertory hymn. He was well aware that when that song was sung, he had to preach and to win some coins, he could well polish his tongue.